All my life people have asked me the same questions:” What’s it like knowing your father is a gangster? How old were you when you found out? Aren’t you afraid of his friends? You know they kill people.”
I live in a temporary tide-pool, a lily
floating against the current, weighted
down by a suit of armor that shields me
from the beauty, love and freedoms stirring in my bud.

What seemed insignificant at the time was the diving board into my Dad’s history. I was watching a Bugsy Siegel documentary on my television in San Diego during 1993. It was the first one I’d seen. Three historians joined in on the violence Bugsy honored and esteemed. Half-way through the celebratory lynching of Bugsy and his pals, a reporter made the statement that ‘It’s obvious Allen Smiley was there to set Bugsy up for the hit.’ Andy Edmonds stated that Dad conveniently disappeared into the kitchen during the time of the shooting. It wasn’t until a photograph of my dad appeared on the screen; a man with thick graying hair that I noticed an expression I’d never seen, horrifying misery. I moved closer to the television to see his face up close. A kaleidoscope of emotions rose to the surface: anger, shame, curiosity, and disbelief. I was forty years old.

The first time I’d seen those photographs of Ben Siegel slumped on that sofa; an eye bleeding down his face was a day back in 1966 at the age of thirteen. My best friend Dena lived in Brentwood with her divorced mother and siblings. We hooked in the unfamiliar and confusing imbalance of a broken home life. Dena was suffering depression after her parents divorced and I was dangling from my father’s fingertips hopelessly conflicted after my mother died. Dena wouldn’t let a day go by without calling me. ‘Are you all right?’ She didn’t like my father and her reasons were mature beyond her years, ‘Your father scares me.’ After school one afternoon we stopped in the Brentwood Pharmacy. Dena was looking at the book rack and I was following along.
“Lily, my mother told me your father is in a book, The
Green Felt Jungle. It’s about gangsters. Wanna see if they have it?” I agreed to look because Dena was interested, but it meant nothing to me. She twirled the book rack around as I stood behind her watching.
“That’s the book! Let me look first and see what it says,” she whispered. I could feel her arm tense up as I grasped it.
“Oh my God! There he is,” she said. We hunched over the book and read the description of my father, “Allen Smiley, one of Ben Siegel’s closest pals in those days, was seated at the other end of the sofa when Siegel was murdered.” Dena covered her mouth with one hand and kept reading silently.
“What does that mean? Who is Siegel?” I asked.
“Shush–not so loud. I’m afraid to tell you this. It’s awful.”
“What’s awful? Tell me.”
“Bugsy Siegel was a gangster in the Mafia. He killed people. Your father was his associate.”
“I don’t think I should see this.” I turned around abruptly to leave the drugstore. Dena followed me out.”
“Lily you can’t tell your father you saw this book. Please don’t tell him I told you.”
“Why not?”
“My mother told me not to tell you. Swear to me you won’t tell your father!”
“I won’t. Don’t you tell anyone either.”
A few days later after Dad left for the evening I opened the door to his guarded bedroom. I walked around the bed to a get a closer look at the photographs on the wall. It was the first time I could read the inscription. 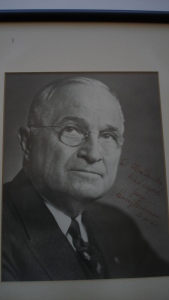