Screenplay based on a true story.
By: Luellen Smiley
LOGLINE:

Luellen (Lily) is the daughter of Allen Smiley, Benjamin “Bugsy” Siegel’s best friend, and business partner. Smiley, seated next to Bugsy the night of his murder, marked by historians and the media  as the set-up man. Lily rips herself from comfort and innocence into confronting her father’s nefarious criminal life. When she breaks the mafia code of silence ten years after her father’s death; she faces an unexpected opponent.

Does this procure your interest? 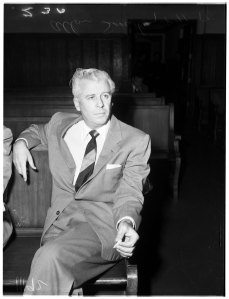 If so tell me.

To a drama-whore like myself, uncertainty is a cocktail. If my life isn’t wrinkled with folds of conflict, I will invent them. These past recollections were the building blocks of my future; I lived on the edge with my father.
Ann, my therapist, asked me about my mother but there was so little to tell. She was restrained to her secrecy, some vow she gave my father, and the personal veil of repression that cloaked all of her past. I told Ann that I was adopted into my friend’s homes by their mother’s, the ones who had met mine.
My best friend Denise lived in Brentwood with her divorced mother and siblings. We hooked in the dark unfamiliar and confusing imbalance of a broken home life.
Her mother was suffering depression after a recent divorce and I was dangling from my father’s fingertips, helplessly.
After my mother died, Denise wouldn’t let a day go by without calling me. “Are you all right,” she’d say. She didn’t like my father, and her reasons were mature beyond her years, “He frightens me.” Denise wouldn’t spend the night at my house, but once, and she said that I could stay at hers anytime I needed to get away.
After school one afternoon we stopped in the Brentwood Pharmacy. Denise was looking at the book rack and I was following along.
“ Luellen, my mother told me your father is in a book, The
Green Felt Jungle. It’s about gangsters. Want’a see if they have it?”
I agreed to look because Denise was interested, but it meant nothing to me.
Denise twirled the book rack around, and I stood behind her watching.
“That’s the book! Let me look first and see what it says,” Denise whispered. She tensed up; I could feel it in her arm, as I grasped her.
“Oh, my God, there he is,” she said, and we hunched together over the book and read the description of my father, “Allen Smiley, one of Ben Siegel’s closest pals in those days, was seated at the other end of the sofa when Siegel was murdered.” Denise covered her mouth with her hand, and kept reading silently.
“What does that mean? Who is Ben Siegel?” I asked.
“Shush, not so loud. I’m afraid to tell you this, Luellen. It’s awful. ”
“What’s awful? Tell me.”
“Bugsy Siegel was a gangster. He was in the Mafia. He killed people. Your father was his associate.”
“I don’t think I should see this,” I said and started to leave the drugstore. Denise followed me out.”
“ Why did Bugsy kill people?” I asked.
“Because that’s what gangsters do. Luellen, you can’t tell your father you saw this book. Please don’t tell him I told you.”
“Why not?”
“My mother told me not to tell you. Swear to me you won’t tell your father!”
“I won’t. Don’t tell anyone else about this Denise, all right?”
“Luellen, have you met any of your father’s friends?”
” Yes, I’ve met them. I love his friends.”
A short time after that I waited until my father left for the evening, and then I opened the door to his bedroom.
I walked around the bed to a get closer look at the photographs on the wall. It was the first time I could read the
inscription: To Al, my dear friend, Your pal, Ben.
I stared at his eyes, droopy heavy-lidded sexy, and a gleaming boyish smile. It was a different photograph, but it was the same man in the “Green Felt Jungle.” The photograph placed next to it, was of Harry Truman, with a similar inscription dated 1963. The disparity of Benjamin “Bugsy” Siegel alongside Harry Truman wouldn’t mean anything to me for another thirty years. At that moment I was driven with curiosity and anticipation of what Denise had told me.
I opened the top drawer of his dresser. It was fastidiously organized with compartment trays for rolls of coins, a jewelry tray of diamond cufflinks, rings and watches, and another tray of newspaper clippings. The next drawer was stacked with neatly folded shirts in tissue paper. Under that was a drawer with a lock on it.
“What are you doing in my bedroom?” I slammed the drawer, muted by his stern expression. He pulled a key from his pocket, and locked the drawer.
“ HOW DARE YOU GO INTO MY THINGS! His hands shook, the veins in his neck inflamed.
“What is it you’re looking for? Luellen. Tell me, or else you will not step out of this apartment for a month. LUELLEN! Speak up! What are you looking for?”
“ I was looking for pictures?” I stammered.
“ What kind of pictures?”
“ Photographs. Of…Mommy.”
“ You’re lying to me! Don’t think you can fool me, you can’t. You want to see photographs, have a look at this one.” Then he pointed to the picture of Ben Siegel. Every vein of his neck swelled. He reminded me of a snarling wolf about to rip my head off. I looked down at the ground, and held my breath.
“Now you listen to me and don’t forget this for the rest of your life. This is Benjamin Siegel! He was my dearest and closest friend. You’re going to hear a lot of lies and hearsay about him. They call him “Bugsy,” but don’t let me ever catch you using that term. ” I  have not forgotten.

SCREENPLAY:  My Hoodlum Saint is the story of a woman whose survival is wedged between love and fear of her father. It exposes my struggle to survive adolescence while growing up in my father’s secret and terrifying world, where only family could be trusted.