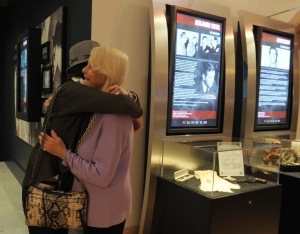 BY: Luellen Smiley
When I was eleven years old  our home burnt to the ground in the Bel Air fire, and everything we owned fell to ash. Shortly after my mother moved us to an apartment in Brentwood, a mammoth carton arrived and was placed in the center of the living room. My mother cut it open and urged me to look inside. I sat cross-legged on the avocado green carpeting and discovered bundles of garments; Bermuda shorts, blouses, sweaters, and shirts.
I quickly shed my worn trousers and stepped into a new outfit, dancing about as I zipped myself in. My mother watched, and echoed my childish yelps of elation.
“Mommy, who are these from?”
“They’re from your Aunt Millicent.”
“Who is she? I don’t remember her.”
“You were a little girl. She loves you very much.”
Years later, my father, Allen Smiley, called and told me to come over to his apartment in Hollywood.
“Why Dad?”
“Millicent is coming by; I told you she moved here, didn’t I?”
I’d learned Millicent was Benjamin Siegel’s daughter, and Ben was my father’s best friend. Dad was sitting on the same chintz covered sofa the night Ben was murdered.
“You mean Ben Siegel’s daughter?”
“Don’t refer to her that way ever again; do you hear me? She is Aunt Millicent to you.”
When my father answered the door, I watched as they embraced. Millicent had tears in her eyes. She walked over to me, and took my hand. I looked into her swimming pool blue eyes and felt as if I was drowning. She sat on the edge of the sofa and lit a long brown Sherman cigarette. I studied her frosted white nails, the way she crossed her legs at the ankles, her platinum blonde hair, and the way her bangs draped over one eye. What impressed me most was her voice; like a child’s whisper, her tone was delicate as a rose petal.
I spent the rest of that afternoon memorizing her behavior. She emanated composure and a reserve that distanced her from uninvited intrusion.
Over the next few years, Millicent and I were joined through my father’s arrangements, but I was never alone with her. When he died in 1982, she was one of only three friends at his memorial service.
As the years passed, and my tattered address books were replaced with new ones, I lost Millicent’s phone number. I had been researching my father’s life in organized crime, and had gained an understanding of my father’s bond with Ben Siegel. My discoveries were adapted into a memoir and recently into a film script about growing up with gangsters. During this time, I had reconnected with several of Dad’s inner-circle, but Millicent was underground, and now I understood why.
Last year I received an email from Cynthia Duncan, Meyer Lansky’s step-granddaughter. She told me about Jay Bloom, the man behind the Las Vegas Mob Experience, a state of the art museum that will take visitors into the personal histories of Las Vegas gangsters. Cynthia contributed her significant collection of Meyer Lansky memorabilia, and assured me Jay was paying tribute to the historical narrative of these men by using relatives rather than government and media sources. She wanted me to be involved.
Despite my apprehensions about the debasing and one-sided publicity that characteristically surrounds gangster history, I contacted Jay. In his return note, he invited me to participate, and added, “Millicent would like to contact you.”
A month later I was seated in Jay’s office waiting for Millicent. When she walked in, I stood to embrace her, and this time the tears were in my eyes.
Millicent’s voice was unchanged and so was her regal posture. “Our fathers were best friends, attached at the hip. Your Dad was at the house all the time. I’ll never forget when he and my mother met me at the train station to tell us about my father’s… death. Smiley was very good to us. My mother adored him too.”
Jay took me on a tour of the collection warehouse, and the history I’d read about unfolded before my eyes. The preview room was like a family room to me, because some of the men had been my father’s lifelong friends and protectors. I stopped in front of the Ben Siegel display case and saw an object that was very familiar.
“My father has the identical ivory figurine of an Asian woman. I still have it.” So much of their veiled history was exposed; between these two men was a brotherly bond that transcended their passing and was even evident in their shared taste in furnishings.
Jay showed me a layout of the Mob Experience in progress. I turned to him and asked, “Is it too late to include my father? All the rooms are assigned.”
“Millicent and I already spoke about it. She wants your Dad in Ben’s room.”
After I returned home, Millicent and I talked on the phone.
“Your father belongs in my Dad’s room. They’ll just have to make Mickey Cohen’s room smaller.”
“My father hated Mickey,” I said.
“So did mine! When are you coming back? I’ll kill you if you don’t become part of this.”

This is an excerpt from the memoir I’ve been working on many years. The first manuscript was 800 pages; about three of them were worth reading. The book mutated about 2000 times.

“What’s it like knowing your father is a gangster? Did you know when you were a teenager? Did your father kill anyone? Did you ever meet Bugsy? Aren’t you afraid of his friends? You know they kill people.”

I was thirteen years old when my best friend told me my father was a gangster. She didn’t mean any harm. We told each other everything.  We were standing in the Brentwood Pharmacy one day in 1966, and we turned the book rack around until we found ”The Green Felt Jungle.”

“That’s the book, let me look first and see what it says.” She whispered. I waited while she flipped trough the pages.

“Oh my God, there he is,” she said grasping my shoulders.  We hunched over the book and read the description of my father beneath his photograph.

“Allen Smiley was the only witness to the murder of Bugsy Siegel.”

“What does that mean, who is Bugsy Siegel?” I asked.

“Shush, not so loud, I’m afraid to tell you this Luellen, it’s awful. I don’t believe it. “

“Bugsy Siegel was a gangster, he killed people. Your father was his friend.”

I don’t think I should read this, “I said replacing the book on the rack.

“Don’t tell your father I told you,” she warned.

“My mother told me not to tell you, swear to me you won’t tell your father.”

My father called himself Allen Smiley. The FBI tagged him “armed and dangerous.” The Department of Justice referred to him as the “Russian Jew.” I called him Daddy.   e had salty sea blue eyes blurred by all the storms he’d seen.  When I said something funny, his eyes crystallized and flattened like glass, smoothing out the bad memories.  He was always a different color, dressed in perfectly matched shades of pink, silver and blue. My small child eyes rested cheerfully on his silk ties, a collage of jewel tones. The feel of his fabric was soft like blankets.  He was very interesting to look at when I was a child and open to all this detail.