This is a previous post (2011) that I am re posting for new readers.

MY FAMILY  history was brought to life in an unpublished memoir.   The stories lived on during a long arduous journey of research and trying to get published.   Sometimes I read pages to get close to my parents.  I squeeze in between them like a ghost, hear their voices, and see their expressions.  If I remove the outside world, the hum of the hotel air-condoning , the delivery trucks, and speeding motorcycles,  I can remember swimming in the pool with my mother.  I see her bathing cap strap pulled down across her chin, her red lipstick, and her one-piece strapless bathing suit. I can see her freckles, and her long slender arms backstroking as she swam. 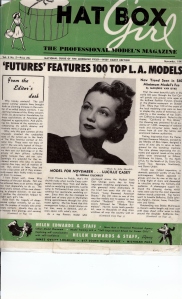 Early in 1960 my father decided to build a swimming pool in the backyard of our house on Thurston Circle.  I had just completed swimming lessons and asked my father for a pool. Years later he told the story: “My little girl asked for a pool, and I built her one.”   I think he built the pool for my mother.   He was under investigation with the FBI and Department of Justice, and spent most days in court defending himself against a deportation order to Russia.   Subpoenas, arrests, and trials were routine events that tied my parents together against a world of misunderstanding.  After eleven years of nail biting suspense, my mother just wore out.  The pool was built with the intention of removing my mother’s anxiety and sadness.   My father designed the shape of the pool around the original pool at the Garden of Allah, a highly scandalous Hollywood hotel apartment that attracted starlets and gangsters in the early 30’s.  I know this tiny detail from photographs I’ve seen of the Garden pool.   More obscure details surrounding the building of our pool were found reading his FBI files.

My father accused the pool contractor of being an informant for the government.  One sunny afternoon he marched him out of the house. I was hiding behind a drape when the confrontation broke out.  I recall the big shouldered contractor running from my father’s threats.  Most likely an FBI agent was parked outside and  followed the man after he scampered out.

The pool was finally completed in mid 1961.   There are photographs of my mother and I in the pool; her smile is radiant and naturally composed.  She and I swam everyday.  My father  loved to swim too, but he was busy with court proceedings and meetings.  Before the year ended my mother filed for divorce, the house burnt down, and I was released from childhood. I don’t regret those events any longer.  They were steps that shaped my character, and what brings me back to the topic of growing up with gangsters.

The best memories of my childhood are in swimming pools and restaurants with gangsters and gamblers.  They were part of the family, and when they were around my father was on very good behavior, and my mother defenseless against their irresistible humor, pranks, and generosity.   She just sort of glided in and out of activities, and helped me ride the vibrations.   She didn’t laugh out of herself like I do, and she rarely yelled.   The older I get, the less I seem to be like her.  Maybe the passage of life experiences determines which parent you will take after. Had I married and had children, maybe I’d be more like her. Since I get into all kinds of tricky situations, and throw the dice, I need my father’s strength more.

Over the years, I have forgotten some of the dead reckoning discoveries I made about our family history.  Still nothing compares to reading about my Aunt Gertie.  She was my father’s sister. Until I read about her in the FBI file, I didn’t know she existed. I haven’t figured out why my father left her out of our life. According to the FBI files she was a remarkably loyal sister. Gertie was the one who confronted the federal agents when they arrived at the family home in Winnipeg, Canada.  She pushed my grandmother out of the interview, and spoke for the family.  The agents showed her a recent photograph of my father.   She told them that her brother left home when he was twelve and they had not seen him since.  She could not verify the identity of the photograph because almost twenty years had passed.  The agents left without any evidence and continued to search for the birthplace of my father. Every time he was arrested, he entered a different birthplace.  He named Chicago, New York, Detroit, and Los Angeles.  His origins were discovered through a letter that his mother had written when he was fifteen and confined to a boys reformatory.  The letter was turned over to the FBI, and that is how they discovered his parents lived in Winnipeg.  The government could not deport my father to Russia without verification from his family. Eventually my father won the battle. He was granted citizenship in 1966, two weeks after my mother died.

Gertie died after my father. I don’t know if they corresponded over the years.  I have learned enough about my father to know he was protecting her from further harassment.  Maybe if my father lived longer they would be coming after me.

One thought on “WRITING MY WAY HOME.”