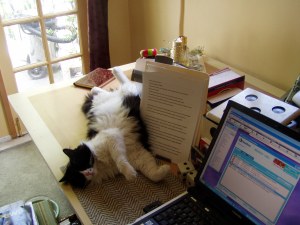 The throw of the dice this week falls on chapter One. Like any creative endeavor, the work is organic and has a life of its own.  A garden doesn’t always grow with your plans; there are seeds that fall outside of the planter. There are disasters that drift though our arrangements and cause chaos. I am beginning to believe nothing ends how we imagine it.   A beautiful day is hijacked by a tornado, a child is murdered while taking a walk with a girlfriend, and a chapter runs away from the author.

The desk where I sit and write is engulfed with books files, index cards citing important events, and characters, note pads, FBI files, and outlines. Period photographs are scattered through-out the room to further sedate any intrusion of the present. I live in a cubicle of my parent’s and famous gangsters.

I was writing a lengthy portrayal of Ben Siegel one day and it occurred to me that he had become a major character in my life.  He played a role that someone else should have; a noted author, or journalist, or poet.  Ben Siegel changed my history because I had to learn to love him.  Learning to love him, meant erasing everything I had read or heard.    It is said he was a ruthless killer, a savage, violent, and he loved to kill.    I turned my head to look at a photograph of my mother.  I was told that she loved Ben too.

Where once I believed my mother was naïve and uninformed about Ben; now I know this wasn’t the case. She knew from the beginning. I‘ve read the news articles of the day, the columns, and I’ve spoken to people who were there. My mother traveled by train to New York with my father, Ben and Esta, and the FBI was in the next compartment.    My mother fit into this strangely singular and controversial group of people.  A long stemmed Irish Catholic beauty, an original John Robert Powers Model with a future on stage, in film and in print was friends, very close friends with the wives of Ben’s group.  I see her in the full frame of who she was, and not the imaginary mother.  I like her this way because it reduces the outrageousness of my former years.

Why I continue to seek answers and probe into their lives is because they never told me anything. Children feel the repression of truth as clearly as they do the pain of bruise.  The more you hide the more they seek. At my root is the inclination to question the world around me, and to mend the breaks in our lives.

Along the way of the first chapter, I discovered that people like to know how it works, how we write in a state of solitude and selfishness.  It seems unnatural until you pick up a book. While a story is moving through the author, they or at least I refrain from answering the phone, checking email, or listening to the voices downstairs. A story or any work of art lives in the artist, it sounds sort of spooky, but that is how it feels to me.  So when intrusions come, these disturbances are exaggerated into surrealistic proportions.

I could easily write about the life of the hotel across the street, the many characters that take care of the guests, and the grounds.  It would be an easy writing assignment because I am not related to the hotel.  But writing about your parent’s, the people who introduced you to the world  is like grinding down your memories from stone to powder, and then picking up each grain and examining it’s meaning.

At the end of the day, as other lives intersect with mine, I see people engaged in human activity, the stimulation of common interest comes from living among people and their needs. In writing you interact with your head.   The narrative is like water; it can run smooth like a river over all the rocks and debris or it can break into a million bubbles and lose everything.

When it breaks apart like a wave on the beach, you begin again, and the erosion of impatience and self-doubt allows you to continue.