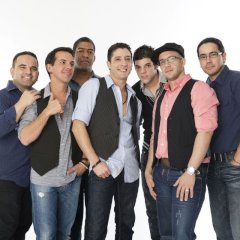 SOMETIMES AN INTERVIEW WITH A MUSICIAN GOES DEEPER than a narrative history of recordings, concert calendar and early training. That happened when I met Jorge Gomez; founder, keyboardist and musical director of Tiempo Libre, an all Cuban born Timba band.

We met in a modest hotel room in Santa Fe, New Mexico where he and his six band members were invited to play for the second time at the Lensic Theater. It was steam-bath hot and muggy that Friday afternoon. As I stood in the doorway, Jorge wrapped up a recording session. After introductions’ everyone cleared out except Jorge and Raul Rodriguez, the trumpet player. Raul, propped up against the headboard of an unmade bed, one leg bent at the knee, the other straight out. He reminded me of Miles; cool in his skin and unflappable.

Jorge and I sat at the kitchenette bar, between us his keyboard on the countertop. Eagerness to begin was dilating from his eyes, so I began with my favorite question to all immigrants; how did it feel when you landed in the United States?

“Oh my God! It was my dream; all through childhood in Havana.”

“Do you love America now?”

His arms shot straight up, as he rose from his chair.

“Are you kidding? We love America! How can you not? This is the best country in the world. I’ve been all over: Europe, Asia, Mexico, and Caribbean. You have all the opportunities; you make your own life here, whatever you want.”  He shifts his attention to Raul, agreeably excluded.

“You can’t do this in Cuba—right Raul?” Jorge leans forward and I’m struck by the indisputable untainted smile.  Jorge continues to dramatize his arrival in Manhattan, with arms and eyes, “I got out because I had friends in New York.  They helped me get gigs in the bars, weddings, and then we got into the clubs.”  The room is silent except for Jorge’s satin smooth transitions from one question to the next. That alone is reason enough to meet Jorge for conversation.

“We were not allowed to listen to Cuban salsa music, or American music; only classical. I trained at the Conservatory all my childhood. I play all of them; Beethoven, Brahms, all of them.”

“Where did you learn Salsa?”

“From America! Yes. As teenagers we climb to the roof and we to wait till state programmed Cuban music goes off the air at 1:00am. Then we wrap aluminum around the antenna and turn our radio on. We pick up American music; like Gloria Esteban, Michael Jackson, everyone. We listened all night so we’d take the rhythms’ in our heads you know.”

“What’s the difference between Cuban Salsa and Latin Salsa?”

“Everyone claims this is their Salsa; it’s Latin, Marenge, Colombian… it is a blend of many cultures and musical influence. We take from each other. All the instruments I learn come from listening. They teach me everything; and I teach them.”

“It depends on the person. See if the person is open to learn everything then he push through. For example we have been playing all these places like Michigan, Minnesota, Minneapolis…all those places that are so.” He pauses to express it precisely. Cold he says, laughing out loud.

“And I’ve seen American band playing Cuban salsa so so good, my God, so well. Blue eyes and blond hair.” Jorge breaks to howl out his enthusiasm and surprise, and demonstrate the memory.

“Who do you like to listen to do today?”

“I don’t know the names, but I have a lot of friends, and they call me and say, ‘I have a band, you come and hear me.’ So I go to the club and Wow! This is good music! Everyone is dancing. I love to see them dancing! I want to see them happy. If they want to sit and listen, good, if they want to sing along, good, they want to dance good.  Everybody have a different reaction. My job is to transfer the energy to the person; that’s the idea. Not to play the music for me; I want them to be happy.”

“ Sometimes you are sick, and no matter how many pills you take you are still sick. Right?”

I nod and watch his facial expressions twitch in thought.

“Then let’s say I come and say, Wow! You look so good man, you are looking good, and he claps’ his hands and pantomimes the joy he’s transferring. ‘You wanna a coffee cake and coffee, yea, come with me, (clapping again) you want to sit here? Yea sit here and see the sun.’ Suddenly, you feel good.” He nods his head. “Trust me.”

Jorge is toe tapping in place, his arms positioned in a warm world embrace.

“You forget all about the pills. Trust me, that is the kind of energy I give.”

“I suppose you don’t get sick?”

“Never. For sure. Never. I don’t know what this head pain is… how you say, headache? Like friends say I have so many problems, so many headaches, I can’t go out. I say, ‘What! Come on we go the beach, to the sand. Bring your conga. What are you crazy! Come on!’ So he comes and we play on the beach in Miami.”

Jorge drums on the counter top. “Have a beer, have another.’ And everyone on the beach comes to us. The whole idea is to forget your problems. So my friend says to me, ‘I had the best day of my life.’ Yea! Be happy! This is youth; this is how you stay young. Life is so big.”

I shake my head, “Not in America; we concentrate on sickness and misery.”

“Yea! You don’t have sickness yet, but you are going to get it.” He ruptures into laughter, and takes a sip of beer. My father tell me one time you have to hear your body; your body going to take you in the right direction. Just listen and you are going to feel so good. Sometimes I can’t go to sleep at night. All the songs and ideas in my head and I can’t sleep. I must write it down, and the next morning I feel so good, because I didn’t go to sleep. I drink beer because I am too happy-over happy.”

“Where did you learn this happiness?”

“From all the difficult paths I have in my life. Childhood was very difficult;no food, no water, no electricity, no plumbing. What you going to do? Party, go outside, dance, play basketball, baseball. I get my friends and they say, my problems’ are bigger than yours. Bla bla bla.”

“ At the end of the day you are so happy because you see people less fortunate and some more, and you are in the middle, and you want to help those people, you can’t go it alone.”

He chuckles again. His smile is broad as his cheek line. A streak of sunlight crossed the keyboard, and Jorge’s eye and brows are in motion, as much as his legs arms and hands.

“What is Timba music?”

“A mixture of jazz, classical, rock, and Cuban music.”

“Yes, Yes! We are in preparing for that.”

Four hours later I was in the Lensic Theater, twelve rows from the stage. Lead singer Xavier Mill, Jorge, Raul, Louis Betran Castillo on flute and sax, Wilvi Rodriguez Guerra on bass, Israel Morales Figueroa on drums and Leandro Gonzales on Congas opened the set, and five minutes into it I was below the stage. Two and half hours later I was still dancing, along with half the audience. That’s entertainment! http://www.tiempolibremusic.com

The three-time Grammy nominated band will perform Thu, Sep 26, 2013 at a Special Event at the Arts Garage in support of AVDA, Inc. Arts Garage in Delray Beach, Florida.

One thought on “MUSIC and DANCE INSTEAD OF PILLS”