“ Mommy the door knocked.’ I said

The valet reminded me of the munchens in Wizard of Oz, because of their berets, and tightly fitted double breasted coats. But it wasn’t the valet or room service, or anyone that I recognized.

“Lucille, darling is everything to your satisfaction?”

“Hello Jack. Yes the room, flowers, and fruit basket are so lovely. Thank You.” 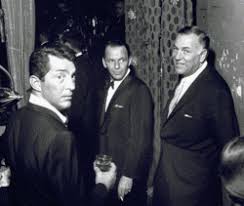 It was the smiling big faced, former bouncer of the Copacabana New York whose name I knew only as Uncle Jack.

Jack was subtle as a semi-truck; and if the world was coming to an end, I’d follow Jack. He had fingers thick as sticks of dynamite and he squeezed my blubbery cheeks until they turned purple. I knew a cheek squeeze meant the person loved me, so Jack didn’t frighten me. I learned thirty years later it was Jack Entratter; a man of chest heavy bullying, dinosaur New York threats, and answered to Frank Costello. I don’t believe he pulled out the Casino movie style butcher chopping that we always see. I just think Jack did what Frank asked, and Frank didn’t randomly demand nail stripping, ball butchering violence you see in the movies. Remember it is a movie.

My mother dressed up with a fur wrap (they wore furs in Vegas) and dressed me in a Pixie Town ensemble that was so starched I couldn’t bend my arm, and we went to the Copa, for the dinner show. Ella Fitzgerald was the feature entertainer of the night. If I wasn’t in a room at La Posada tonight, listening to Tito Puente and Johnny Pacheco, tipping a glass of Chilean wine, without all my files, and notes, I could reference many things about that night. I rented the house for the twelve days of Christmas and I cannot access anything other than what I brought. I could go googling all night, but it is close to time to eat, and parlay my chances in the lobby, meeting and greeting, as I feel I should do, because hotels are the only socially invasive venues left. I greet everyone who knows how to walk without revealing their miserable or self congratulating lives. I really like people who keep their triumphs and sorrows until the second or third time we meet. I don’t like digesting four courses unless I ordered them.

Ella, came out on stage, and we were seated under her heaving breasts, the first row, the closeness was dressing room intimate. There were others at our table but they were sort of like faded ghosts after Ella started her fireworks. TO BE CONTINUED.

One thought on “PART TWO: SWIMMING WITH GANSTERS”